Happy Ever After? No. Happy Anniversary!

No, I didn't say blogoversary. Honestly, I don't keep track of such things (and since I moved, when do I start counting from?).

Anyway, tomorrow I will have been married for fifteen years to a wonderful man who puts up with all my idiosyncrasies and madness. Hell, he even puts up with my friends! People often ask me why I don't write more blatant happily-ever-after stories (at best the HEA is usually implied). The answer to that is simple, I don't believe in them. 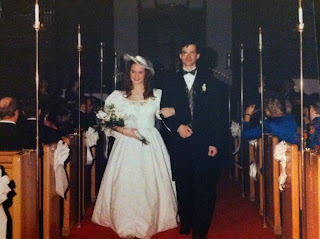 I can hear you now "Wait a minute, Seleste, you just said you've been married how many years?"

Yes, I've been married a decade and a half, and I hope beyond hope that we last a lot longer than that. But it isn't going to be because we met, fell in love, the stars aligned and everything was sweetness and light from there on out. That shit only happens in fairy tales. Real people work to make a lasting marriage (or union or whatever you want to call it). There are happy days and happy moments, but there are also a share of times that suck ass. I honestly worry about people who say they've never had a bad moment in their marriage (and seem to mean it). That either means they've never been tested by life (and can't even pretend they'll know how to handle it if they ever are) or--and you can refer to my as Dr. House for the rest of the post--somebody's lying.

I've said many times that I like my stories to reflect reality. And in my experience, reality doesn't involve happily ever after. It involves fights about money and in-laws and kids and sex and what to watch on television. But it also involves working through those things to come out stronger in the end. I don't want a happily ever after for my characters because I wouldn't want one for myself. Happily ever after is a surface beauty that will crumble with the first crack. I'd rather have something strong--forged in fire and beaten into shape. I want something that will last.

I like to think that's what I have with Shane. He drives me crazy and occasionally makes me want to throw things, but at the end of the day, I want to go home (or stay home, because, you know, I work here) to him.

Happy Anniversary, honey. Here's to not killing each other before the next one.

In other news...starting next week and running through November, this blog and that of my YA counterpart will be devoted to a NaNoWriMo project called #NaNoRebels. Please check out http://julieparticka.blogspot.com for more details and to decide if you want to be a Rebel too.
Posted by Seleste deLaney/Julie Particka at 12:06 AM