So, other than revealing them, I don't really talk about my covers a lot. I have some that I love and some that I...don't. You see, the fact of the matter is authors get to fill out this little paper about our book that gets sent to the cover artist. From there, they interpret what you sent and build a cover based on it. That's it. That's our say in things. Sometimes if something is really off, we get to go back in and say "Whoa! Wait a minute!" But reality is, we trust the cover artists to do their job.

It's one of the reasons it's so exciting to get covers that are just right. And sometimes it isn't fully clear to the reader (or casual viewer) why it's such a perfect cover. So, I'm going to dissect my newest cover (for Clockwork Mafia) which I love.

*I was going to try to do this all fancy-pants with circles and arrows and numbers, but yeah...not happening tonight. Sorry.* 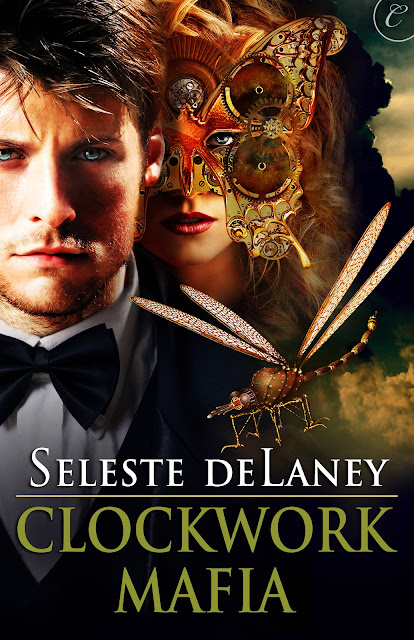 Okay, first and foremost is the mask. Isn't it gorgeous? Henri wears an elaborate clockwork mask like that in the beginning of the book, and I love that her face is hidden for this cover. You see, a lot of Clockwork Mafia is about Henri figuring out who the hell she is in the aftermath of the events in Badlands so it's very appropriate that she's "hiding" on the cover.

Then there's the dragonfly. While it isn't exactly like my clockwork dragonfly tattoo, it's fantastic. And it's one of Henri's designs that gets a lot of play in this book. I'm really glad it's on there.

Then there's Carson. *happy sigh* Okay, first off, the model is just beautiful in general. Secondly--though I think he actually has short hair rather than long hair pulled back--he looks like Carson. Honestly, the more I look at him, the more he looks like the character right down to the way his neck is all scruffy.

And here's my favorite part of the entire cover. Henri in her mask is kind of representative of Philadelphia society life. And the dragonfly is representative of her life as an inventor... And Carson is trapped in between the two. It's incredibly symbolic for the story.

Honestly, I have no idea how the cover artist managed to fit things so perfectly, but I don't think I could have paid for a brand new photoshoot that captured the essence of this story as well as this cover did. HUGE thanks to Kix by Design for the incredible cover. And if you happen to know the name of the model for Carson... ;-)