So excited! My first guest post of 2013 is from none other than the incredible indie author Steve McHugh. Steve is amazing, and as one of only two men in my writing group, he gets more than his share of romance in his reading (and writerly conversations). Guess a little bit of that rubbed off on him, because he's here today to celebrate his newest release, Born of Hatred, and talk about one of my favorite topics--writing sex scenes. Yummy!

Take it away, Steve!

The Art of Sex Scenes
Although a massive generalisation, it’s very quickly become apparent to me that women write better sex scenes then men. I can think of, at a push, three male writers who write excellent sex scenes in their books. I can think of at least a dozen women, right off the top of my head who do the same.
Now, of course there are women who can’t write sex scenes either, but even so, the odds are firmly in the female court.
So, it was with a little trepidation that it became apparent that my first book, Crimes Against Magic, was going to have sex in it. This was a problem for one reason. My sex scenes were dreadful. They read a little bit like an educational sex talk given by a teacher for whom the word ‘sex’ should never leave their mouth. They were dry, dull and quite frankly about as sexy as wet cardboard.
So, I tried spicing them up a bit and found a new problem. They now sounded like a porn film. All I needed to do was add a handlebar moustache and have the main character come to check on the woman’s boiler, fridge, cooker, pluming and I’d have had a career in writing truly terrible sex scenes. It’s something to think about if this whole ‘published author’ thing doesn’t work out.
So I needed to re-work it again. And this time I found some good advice. Apparently, I’m pretty good at writing action scenes. So, why not try writing a sex scene in the same way? Everyone writes action scenes in their own way, but I tend to map out where everyone is and what they’re doing, or going to be doing.
Applying it to a sex scene was actually straight-forward. Instead of several people all in the same place I only had to deal with two (although, your mileage may vary). So, I wrote it as if it were an action scene, or a fight. Once I had the backbone for it, I found it much easier to go through it and make it ‘sexier’, but having that base was necessary for me.
Since that first time, I’ve found it much easier to switch into ‘sex scene mode’ for writing and can usually manage it without the need for the clinical part first. I’m never going to write the greatest sex scenes of all time, but I hope I’m no longer in the same bracket as some of the truly terrible ones.

Steve McHugh is the author of the popular Urban Fantasy series, Hellequin Chronicles. The first book of which, CrimesAgainst Magic, was published in April 2012 and followed by the sequel, Born ofHatred in December 2012.

To learn more about Steve and his work, you can find him:
http://stevejmchugh.wordpress.com/
https://twitter.com/StevejMchugh
https://www.facebook.com/Hiddenrealmspublishing

And find a copy of his most recent book, Born of Hatred, at Amazon.co.uk and Amazon.com 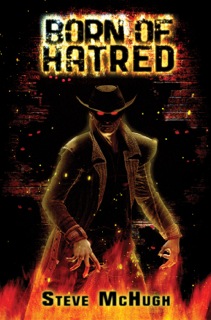 There was a time when Nathan Garrett was feared. When the mention of his name was enough to stop his enemies in their tracks. That time has long since passed. When Nathan's friend asks for help investigating a pattern of horrific crimes, he reluctantly agrees. But his investigation leads to a serial killer who is something more, or less, than human, a creature of pure malevolence and hatred.

There are some things that even a 1600-year-old sorcerer hesitates to challenge. But when evil targets those Nathan cares about, his enemies will discover exactly who Nathan used to be. And why they will learn to fear him once more.