Give a Reader a Reader 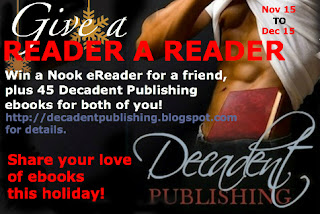 It's that time of year when everyone starts saying to themselves, "What can I buy for X?" (X of course being the algebraic equivalent of whichever given friend you can never buy for.) This year Decadent Publishing is helping you out with Give a Reader a Reader. AND, you don't only get a Nook to give a friend, you also win 45 books for your friend AND you. How awesome is that?

But, you say, the odds are so not in favor of me winning that. So I'm here to sweeten the pot. I'm going to post a freebie holiday short below, and by answering the question in the Rafflecopter correctly (it's an easy question if you read the freebie), you're entered to win a copy of either Of Course I Try (which is one of the books on the Nook--list of awesome books and authors below--so if you win the Nook, don't pick this one :P) or it's sequel The Ghost of Vampire Present. Vampire smexiness! (If you already own both, we'll figure out an alternate prize.)

So, without further ado, I give you a story about one even made Max... Max. Every character has a history, and every once in a while, a special holiday gift is involved.

Below is the Rafflecopter for the big giveaway.
Your question for entry here is: What is the name of the character keeping Max captive?


a Rafflecopter giveaway
Posted by Seleste deLaney/Julie Particka at 12:01 AM