I have a new release this week! Edits moved super fast and it got bumped up on the release schedule. So, my very first M/M romance comes out Friday from Evernight Publishing. It's my second story in the Cupid's Conquests series and the first M/M for the series! I'm both very excited and very, very nervous.

So, a little story. At the Romantic Times Booklovers Convention in Chicago this past spring, my friend Deanna Wadsworth introduced me to the amazing Damon Suede. Between the two of them, they basically dared me to try writing M/M. Anyone who knows me knows that it's rare for me to pass up a dare, so as soon as I had time to breathe, I started on this story of two guys who met at a time when one was still in the closet and the other hadn't decided if he belonged inside or not. Fast-forward more than a decade and our college hotties are back on campus and pretty close to right back where they started.

It wasn't the easiest thing I've ever written, that's for sure, but I understood Griff and Colby in a lot of ways and wanted to tell their story. Thankfully, Evernight was right there with me. So here's a little taste of Love & Other Indoor Sports:

Cupid still has a lot to learn, and this time he's heading to college to do it. 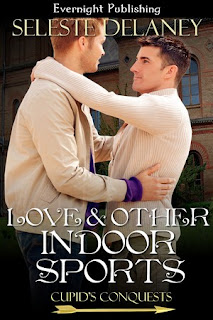 Griffin and Colby were shoved together by fate during a fraternity hazing game of spin the bottle but, in a world deserted by Cupid, fear and uncertainty pushed them apart. Now, twelve years later, they're getting a second chance with each other. A woman in Colby's life, however, doesn't like what she sees as competition for his affections, and she's willing to ruin both men if they don't bow to her demands. After all this time, are they willing to risk everything for a chance at happiness, or are they destined to lose each other again?

Cupid won't give up easily though. He has one last game for them to play and, this time, it's winner take all.


AND, in other good news, there are at least two more Cupid's Conquests stories coming from other authors before the holidays! The series is building slowly, but I'm so excited that other people have taken up the call to get Eros back to Olympus. I hope you'll check out Love & Other Indoor Sports and all the other titles in the series.
Posted by Seleste deLaney/Julie Particka at 12:03 AM