So...I'd planned a righteous rant for today. Problem is, I'm still too angry and it came through in the words. No one needs that kind of negative energy from me. So, I'm holding off until I have a little more distance and then I'll still post about the most important parts of it.

So yeah. I'm nerv-cited, heavy on the nerv. Which sounds a little like nerd which is kind of close to geek, so... how about this geektastic excerpt and I'm going to go flail in the privacy of my bedroom.

He waved the bartender over but a girl slid onto the stool next to Cal and the bartender stopped for her first. Typical.“What is the strongest decent-tasting vodka drink you know how to make?” Penelope? Her voice startled him and his fingers slipped in the condensation on his mug. Only his quick reflexes kept the beer from sloshing all over him.She turned his way. Same dark brown waves—this time done up with leaves pinning them to her hea —same button nose, same sensual golden-brown eyes. Somehow good fortune had decided to shine on him for the moment and brought her to his side again.Penelope leaned on the bar and pursed her lips as she looked at him. Her gaze didn’t rake over him like other women’s—she stayed fixed on his eyes like she could pin him in his seat. He’d never felt so happy to be trapped. “For a minute there, I figured you had on some ridiculous gauntlets or something, but I guess you just have butterfingers.” She winked, breaking the spell she’d cast on him. “Cursed by a sorcerer with a flair for the ridiculous?”His lips twitched into what felt like a very non-broody non-dark-elf smile, and he fought his way back to seriousness. “Unlikely. I would have killed him before the incantation left his lips. I rather think it was shock at the way in which you so boldly invaded the space I’d clearly defined as my own. Few would have the nerve to attempt such a maneuver.”“Yes, well, not so long ago I sent a human aggressor into the fetal position with nothing more than a single move of hand-to-hand combat. I’m feeling rather full of myself right now. Pardon me if I don’t consider a dark elf who can’t decide between a scowl and a smile to be much of a threat.”Oh, he already liked her a lot more than was wise. “I think I’ll choose to alternate between the two in order to keep you on your toes.”“And here I thought you wanted to drive me off.”“Perhaps.” He shrugged, noting the way her eyes lingered on his shoulders. “Or maybe I was just waiting for someone brave enough to stick around.” The bartender returned with her drink—something crimson and steaming. She’d said vodka, so he shouldn’t react to it too badly after the beer. The bartender set the glass down, and Cal tipped his head toward it. “I’ll take one as well, and put them both on my tab.”The bartender was gone before Penelope managed to get a word out. Her mouth snapped shut a second later. She held up her glass, stared deep into the contents for a moment, then turned and met his gaze. “I appreciate the drink, but I hope you aren’t expecting anything for it.”Huh? “Only the pleasure of your maddening company for as long as it takes you to drink it.”She regarded him over the top of the glass, something like a challenge dancing in the depths of her eyes. The glass slowly tipped up, her lips molding against it, and she kept tipping. Her throat worked as the liquid poured through it. When she placed the glass back on the bar, it was empty. She ran her tongue along her lip, catching the drops of red that lingered. “And now?”If she was this much of a spitfire all the time, he was doomed—in the very best way possible. Assuming she liked him, too...and that she didn’t have a boyfriend. He’d deal with the latter issue if and when it came up because, at the moment, she wasn’t acting like a woman with a man waiting for her.He jerked his head to the side in a half-assed shrug—two could play her game. “And now you either walk away, let me buy you another drink, or stick around to talk just because you find me charming. Your choice.” He took a sip from his own glass and turned to examine the bottles lining the far side of the bar. And watch her in the mirror behind them.Her lips curled up and then she pressed them together in a way that was simultaneously innocent and sexy as hell. “If I let you buy me another one I’ll have to drink it much slower. You could be stuck talking to me for hours. Positive you don’t want to take your chances with someone that’s more of a sure thing?”This was so much better than a stalker-ific phone call could have ever turned out.Cal tilted his head toward her and forced himself to frown when all he wanted to do was completely break character and grin like an idiot. “I don’t know about that.” He waved at the bartender and pointed at her empty glass when he finally got the man’s attention. “Seems like you just confirmed you are most definitely a sure thing as far as conversation goes.” 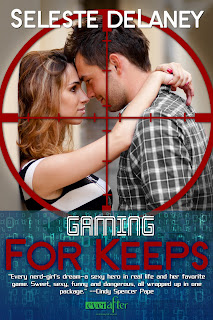 So there's a little taste-test of Cal and Pen. If you want more (and I hope you do) there are all sorts of things you can do!

Add Gaming for Keeps to your Goodreads shelf

(It might be other places too, but I know you can) Pre-Order from
Amazon

AND the official blog tour starts tomorrow! So be sure to keep an eye out for all of that <3
Posted by Seleste deLaney/Julie Particka at 12:46 PM