I need it to not be summer break anymore so I have some idea what day of the week it is. Sorry for the very late post. Anyway... the blog tour for Kiss of Death starts next Monday. So there will be no post here other than to remind you to stalk me elsewhere the following week. For those who like to know what's going on in advance, however... 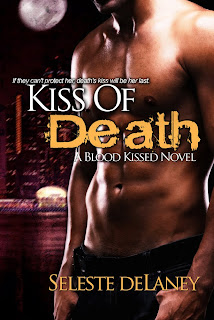 8/20-- I'm at Wicked Lil Pixie with a game to celebrate the awesome man flesh on my cover. Trust me, you'll like the game.
8/21-- I'm at Insane Hussein Reviews with the first post of the Remy Says series. For those of you who don't know, Remy is my favoritest character of mine ever, so he's getting a bit of play during the tour. Here he'll be talking about sex with vampires.
8/22-- I'm at Yummy Men & Kick-Ass Chicks with another bit of Remy Says. This time he'll be talking about the best ways to kill a vampire. As well as at the Evil League of Evil Writers talking about something bookish or ranty... or both.
8/23-- First interview of the tour at Hennessee Andrew's blog. She asked some interesting questions. I love those :)
8/24-- Today I'm at Smexy Books with post three of Remy Says. Today it's Top 10 Ways to Infuriate the Vampire Council.

8/27-- I'm at DemonLover's Books & More with Remy Says: Remy's Guide to Demons
8/28-- RELEASE DAY! I'm celebrating with an interview over drinks with my editor of awesome, Skyla Dawn Cameron.
8/29-- Today I'm at PonyTails Reviews with another edition of Remy Says. Today he's talking about pets. And since this is Remy, it might not be what you're expecting :P
8/30-- Remy Says at Keri Stevens' place. Today he'll be talking about Alphas versus Doms.
8/31-- Finishing up the official tour with an interview at the home of author Steve McHugh! In addition, I'll be talking about ChiCon and panic attacks at Steamed! (Not really related to this book, but... Also, for those of you who will be at ChiCon, be sure to look me up! Panel, KoD reading, and beer, oh my!)

9/3-- I'm home from ChiCon and at the ParaPosse today!
9/7-- Doing something a little different. I'm at Romance eBook Haul, but I think I'm going to have my characters play along for the post. It should be... entertaining :P