Woot and Woohoo! And Why It Matters

A lot of an author's job is done in relative solitude. We write alone, we edit under direction but essentially alone, we pimp and we promo while sitting at home at our desks/kitchen tables/sofas... alone. Our human interaction is generally of the digital sort. That's the sort of connection we have to others in the business when we start freaking out that our work sucks. And I don't know an author who doesn't go through the "my book sucks ass" phase at some point. So we run to the other people who have been there.

But in the back of our minds, there is always this little voice that reminds us how easy it is to lie on the internet. That doesn't even touch on the fact that authors are career liars.

So, while the conversations have the climb down off the ledge effect, we still make a mental note of exactly where that ledge is because we know we'll be back. Then the book comes out and reviews start coming in (possibly before release even). This stage of the game is like peri-menopause on crack. They loved it! They totally got what I was going for turns into Oh my God! They hated my main character and said she was too stupid to live with the next review. And it's up and down like that at every turn. This one swooned over my hero!!! ...Oh no, this one said the romance was completely unbelievable.

And I say all that while loving reviewers for giving my books their time anyway. (We will not get into the reviews are not for authors thing here. I know it, you should know it, and I don't even rant in private about reviews. I just panic a little.)

But even if the vast majority of reviews are of the "liked/loved it" variety, authors know that the point has come when stuff is completely outside their control. I can't make anyone buy my book anymore than I can make a reviewer like it. I want you to buy, sure, but I can't make you. So, we stand there (virtually) with a tray of goodies, waiting to see if anyone wants them. We don't shake, we don't stutter. At least that we let anyone see. Inside, we're a quivering mass of nerves.

That's how the publishing game goes. You have to be a little bit of a masochist to love that feeling.

But every once in a while something happens that stops your heart for a second and makes you jump up and down screaming "They like me! They really like me!"

While I was in Disney, I found out I was up for Book of the Year at The TBR Pile. The first round of voting was reader-driven. My readers had to go there and vote to get me in the finals. I told people about it, but it was... nerve-wracking. There were some great books in that group, and I didn't know if I could squeeze into one of those top three slots. My fans came through though, and I was a finalist! Woot!

Honestly, I thought it was over then. The finals were judged at The TBR Pile and based on some formula that I don't know the ins and outs of that dealt with the initial review, sales numbers and I have no clue what else. So, I wrote off the competition then, and thanked everyone for their support. 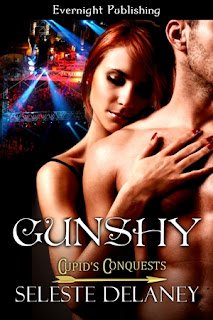 Now I have to switch over to a different part of the story (which I was told I could share). While the person in charge of notifying the winner was waiting for the results, she decided to clean her house (I so know that excited cleaning thing). In the midst of cleaning, she ran across a DVD of an old Sandra Bullock movie. The name of the movie? Gun Shy. She got the results right after that and contacted me to not only tell me my own GunShy had WON Book of the Year but to share the story too.

Yep, you read that right. Cupid's Conquests #1 won Book of the Year. (It even says so right over there in the sidebar.) This award means the world to me as I've been struggling with some decisions regarding my writing career, and it helped remind me that I might not know all the people who love my books, but that's kind of the point. If reading my words touches one stranger, brightens their day for even a little while, that is why I'm in publishing and not just writing for my close friends.


Thank you, TBR Pile, for the honor and for the reminder. :)
Posted by Seleste deLaney/Julie Particka at 1:57 PM